Which Hazardous Attitude Do You Have?

Home > Blog  > Which Hazardous Attitude Do You Have? 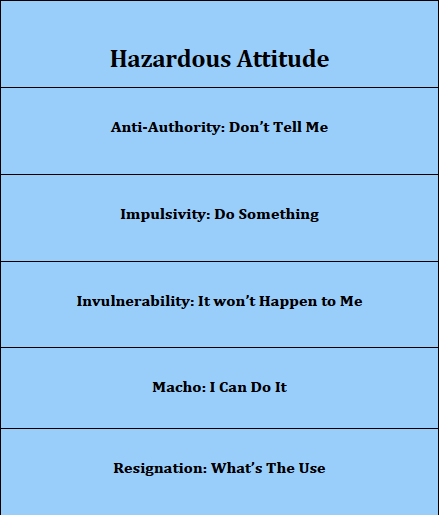 The Pilot’s Handbook of Aeronautical Knowledge (an FAA publication) describes five hazardous attitudes in aviation that pilots should be aware of in order to manage risk and make better decisions. Which one describes your attitude? 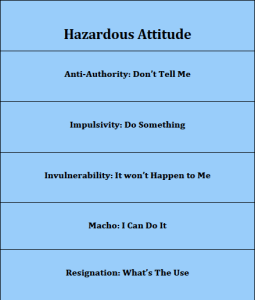 Being impulsive means acting without thinking. Impulsive people make decisions with little or no concern for the consequences. An impulsive pilot, for example, might skip a preflight if he’s in a hurry or take off on a cross country without checking the weather. In an emergency situation, an impulsive pilot may not consider all of his options before acting and could make the situation worse by making bad decisions.

A common attitude of pilots is that bad things only happen to other people. Invulnerability means that you feel invisible and untouchable. Pilots that have this hazardous attitude are sometimes caught saying “nothing bad will happen” and they generally believe that they’re safe and secure all the time. This attitude can cause a pilot to act without caution and increase their risk of an accident or error.

A macho pilot thinks he’s the best pilot in the world and that he can do anything. A pilot with a macho attitude is usually very competitive and can often be found engaging in risky behavior to “show off” their skills. Macho pilots often fly too fast or too low, pushing the envelope in their quest to be the best. Their desire to be better than everyone can mean disaster, as they are more likely to exceed aircraft and human boundaries with fatal consequences.

Pilots with an attitude of resignation tend to give up easily when faced with a challenge. They don’t take criticism well and avoid making decisions. They often think that there is nothing they can do to change an outcome or fix a problem. Resignation is quite possibly the worst hazardous attitude to have. A pilot with an attitude of resignation might find himself giving up in the middle of an emergency, telling himself that there’s nothing he can do about it. He’ll accept his fate quickly instead of searching for solutions. Pilots with this hazardous attitude are usually very pleasant, but are quick to go along with the crowd and may lack conviction. Pilots are taught these five hazardous attitudes so that they can identify which ones they are susceptible to. With awareness, pilots can recognize when they act in these ways and prevent the hazardous attitude from occurring in the future. Which hazardous attitude do you see in yourself?